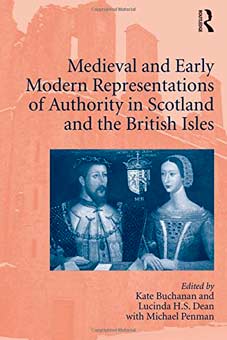 Part I Using and Reusing Internal and External Spaces

DAVID SIMPKIN: Keeping up appearances: the English royal court on military campaigns to Scotland, 1296-1336
RICHARD ORAM: Monastic gatehouses and regality jurisdictions: the gatehouse as representation of secular authority in Scottish monasteries
KATE BUCHANAN: Wheels and creels: the physical representation of right to fishing and milling in 16th century Angus, Scotland
KIRSTEEN M MACKENZIE: A contested space: demonstrative action and the politics of transitional authority in Glasgow 1650-1653

MICHAEL PENMAN: Who is this King of Glory? Robert I of Scotland (1306-1329), Holy Week and the consecration of St Andrews Cathedral
JAMES HILLSON: Edward III and the art of authority: military triumph and the decoration of St Stephen’s Chapel, Westminster 1330-1364
TOM TURPIE: Scottish and British? The Scottish authorities, Richard III and the cult of St Ninian in late medieval Scotland and northern England

ELIZABETH FITZPATRICK: The last kings of Ireland: material expressions of Gaelic lordship c.1300-1400 A.D.
KYLIE MURRAY: ‘Out of My Contree’: visions of royal authority in the courts of James I and James II, 1424-1460
JAMIE REID-BAXTER: James IV, St Michael and the armed man
STEPHEN BOWMAN: ‘By hammer in hand all arts do stand’: the protection and projection of craft privilege in the early-modern Scottish burgh

This website uses cookies to improve your experience while you navigate through the website. Out of these, the cookies that are categorized as necessary are stored on your browser as they are essential for the working of basic functionalities of the website. We also use third-party cookies that help us analyze and understand how you use this website. These cookies will be stored in your browser only with your consent. You also have the option to opt-out of these cookies. But opting out of some of these cookies may affect your browsing experience.
Necessary Siempre activado
Necessary cookies are absolutely essential for the website to function properly. This category only includes cookies that ensures basic functionalities and security features of the website. These cookies do not store any personal information.
Non-necessary
Any cookies that may not be particularly necessary for the website to function and is used specifically to collect user personal data via analytics, ads, other embedded contents are termed as non-necessary cookies. It is mandatory to procure user consent prior to running these cookies on your website.
GUARDAR Y ACEPTAR